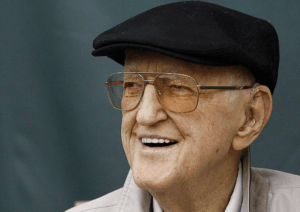 FORT WORTH, Texas — Dan Jenkins, the sports writing great and best-selling author whose career covered Ben Hogan to Tiger Woods, began with Western Union and ended with Twitter, has died. He was 89.

“The message on my tombstone will be, ‘I knew this would happen,’” Jenkins always said, exemplifying the trenchant humor he brought to the 232 major championships he attended, starting with the 1941 U.S. Open at Colonial as a 12-year-old in his hometown.

Jenkins began his career at The Fort Worth Press and rose to stardom at Sports Illustrated with his two loves, college football and golf. He also wrote for Playboy and joined Golf Digest in 1985. Jenkins continued to write books, including a memoir called, “His Ownself.” His best-sellers included “Semi-Tough,” ”Baja Oklahoma” and “Dead Solid Perfect.”

Jenkins covered his first major at the 1951 Masters, won by his beloved Hogan. Starting with the 1969 PGA Championship, he covered 179 consecutive majors. The streak ended when his health kept him from going to Royal Liverpool for the British Open in 2014.

His last major was the Masters last year.

Jenkins became only the third golf writer to be inducted into the World Golf Hall of Fame in 2012, following Bernard Darwin and Herbert Warren Wind.

When former PGA Tour Commissioner Tim Finchem listed all of Jenkins’ achievements for the World Golf Hall of Fame, including his numerous writing awards, Jenkins replied: “You left out my cure for polio.”

Jenkins looked at all the people who had been enshrined and concluded that “I have known 95 of these people when they were living. I’ve written stories about 73 of them. I’ve had cocktails and drinks with 47 of them. And I played golf with 24 of them.”