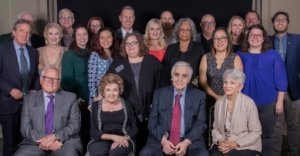 DALLAS, Dec. 3, 2018 – The Press Club of Dallas honored 17 winners and an additional 10 finalists from throughout Texas Dec. 1 at the 2018 Hugh Aynesworth Awards for Texas Journalism.

The journalists and their news organizations represented Texas reporting in the following categories: daily newspapers, weekly newspapers, magazines, television, radio, and digital news sites. There was also a public service award that was open to all media organizations.

“Tonight, we celebrate the best in Texas journalism,” Press Club President Paul Wahlstrom told the audience. “These are the most creative, hard-fought examples of what a true story can be.”

Wahlstrom said the contest’s judges were given free rein in determining finalists. “The judges were asked to pick only award-worthy entries — no minimums, no quotas. All the finalists are award-winners.”

Wahlstrom described the judges as “well-known journalists from the East Coast with no involvement in Texas journalism, so their deliberations were based on what they read and saw, not who they knew.”

Before the awards were announced, Aynesworth, who witnessed the assassination of John F. Kennedy Nov. 22, 1963, and all the subsequent events, answered questions from the audience. He was asked to recall his most vivid memory on that fateful afternoon. “I remember a man pointing up at a window in the Texas Schoolbook Depository,” Aynesworth said. “‘I saw him! I saw him with the gun,’ the man said to me. Later on, it was his description that the police used to capture Lee Harvey Oswald at the Texas Theater. I’ll never forget the look on that man’s face.”

Here is a list of winners and finalists of the 2018 Hugh Aynesworth Awards for Texas Journalism:

A Hero’s Past: Lost and Found

“The Effort to Bring Back Vinyl Records”

“In A Houston Emergency Room, It Was A Week Like No Other”

“The Leadership of Wilshire Baptist Church”

“Dallas ISD’s Needs Won’t Disappear But You Can Help”

Mollie Belt, Publisher and Editor, March 16, March 30, 2017 (and throughout the calendar year)